Do you want to change pricing plan? Proceed Here

Last night,  the British Restaurant Awards announced successfully announced winners as voted for by the public.  The event was held With over 275,000 votes received from consumers nationwide. The event was one of the hotly anticipated food event of the summer.

The event took place at the prestigious Buddha Bar London in Knightsbridge. Buddha Bar London aims to push culinary boundaries and the menu blends Far Eastern Cuisine with Western tastes and influences. Chinese, Japanese, Thai and other Eastern flavours are stylishly entwined to spearhead a new-wave Pacific Rim cuisine. The extensive wine and sake list compliments the food by featuring a wide selection of both world renowned names and unusual finds, and we pride ourselves to have a unique and experimental cocktail selection. Delicious cocktails and canapes were served to a glamours guests of restaurateurs and VIP’s from across the country. There were performances by singer/songwriter KITTO and ELISE Bailey who added a touch of excitement to the night. Awards were handed out by Indepdent Newspaper’s Rachel Hosie, Evening Standard’s , Klaudia Balogh, Barry Newton, Channel 4’s Sandi  and much more. Best New Restaurant was won by Levi Roots Smokehouse Restaurant .  Levi Roots, picking up the awards commented

“It’s an absolute pleasure to win this British Restaurant Awards . This award means so much as it is voted for by the public and i would like to also take the time to thank my team who are the rock behind  the success of our restaurant” 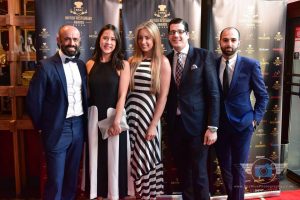 British Restaurant Awards (BRA) is an annual awards ceremony which provides an opportunity for customers to nominate and vote for their Best Restaurants, Chefs and culinary service in the UK.

Best Restaurant in Surrey
The Clink

Best Restaurant in Bradford
The Foundry